The autumn has brought a rush of new publications on sickle cell disease and the 9th Sickle Cell & Thalassaemia Conference, organised by Dr Baba Inusa from Guy’s & St Thomas’ Hospital (7th to 9th October 2015), clarified many of the important themes in current sickle cell research. Long overdue as it is, there now seems to be at last more investigation and research into sickle cell than at any time in the recent past; answering questions, raising new problems and pushing forward the prospect of effective treatments and cure on several different fronts.

The point was made by several speakers at the conference, that sickle cell was first described over 100 years ago and yet there is still only one drug, hydroxycarbamide, approved by the FDA (Federal Drug Administration) in the USA and the EMA (European Medicines Agency) in Europe for the specific treatment of this disease. That compares unfavourably with the 26 drugs currently approved for the treatment of HIV infection; AIDS as a condition was first recognised in the early 1980’s, only 30 years ago. Historically, research into sickle cell disease has been significantly underfunded. In the US, between the discovery of sickle cell in 1910 and the passage of the Sickle Cell Control Act in 1972, about $1 million was spent on research, a miserable $16,000 annually. Although the situation has improved there is no doubt that funding remains inadequate. In 2012, the US spent $65 million on sickle cell research, compared with $498 million on Alzheimer’s, $221 million on asthma and $79 million on cystic fibrosis. This, despite the fact that in the US there are more than 3 times as many people living with sickle cell disease as there are with cystic fibrosis (100,000 v 30,000).

It is not difficult to speculate about the reasons why research into sickle cell disease is underfunded. Kenneth Ataga, from North Carolina, in an article summarising the situation with current drug trials, in the British Journal of Haematology, says that it is “probably due to multiple factors, including the complex disease pathophysiology, as well as socio-economic and political factors.” Well possibly; but the fact remains that sickle cell is almost exclusively a disease affecting black African Americans, and the US remains an overtly racist society, where the black population is poor, disadvantaged and sidelined. Research into sickle cell reflects this reality on the ground. 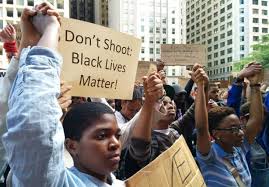 Michael Brown, an 18 year old, unarmed black teenager was shot dead by a white police officer in Ferguson, Missouri on the 9th August 2014. One among many.

The situation in the UK is less easy to quantify. Although there are some 12,000 people living with sickle cell here, the fact remains that research in the UK is very limited and low key. UK society may not be racist in the same way as it is in the US, but the UK was the driving force behind the Atlantic slave trade and, as a nation, profited enormously from the labour of black slaves in its’ American and Caribbean colonies. Britain and Portugal between them were the most successful slave trading European nations, responsible for the transport of 70% of all the slaves who made the “middle passage” across the Atlantic. From the 1560’s until the abolition of the trade in 1807, British ships carried 3.4 million people from Africa to the New World. The profits from the trade were enormous, they kicked started the industrial revolution and underpinned the global hegemony of Victorian Britain. Between 1761 and 1807, slave traders accumulated £60 million, approximately £8 billion in today’s money, from the sale of slaves alone.

Advertisement for a slave sale on the Martha-Brae river at Montego Bay, Jamaica in November 1781. John and James Wedderburn, father and son, were from Perthshire, Scotland. Sir John Wedderburn was the largest land owner in Jamaica. The Eboe, or Igbo, slaves came from the Bight of Biafra, part of modern day Nigeria. They would have been embarked on ships from either Bristol or Liverpool at the ports of Bonny or Calabar.

Not only that, but in 1833, when the slaves were finally emancipated, some 3,000 slave owning British families were “compensated for their lost property” to the tune of £20 million, equivalent, in today’s money, to a staggering £16.5 billion, 40% of the total spending of HM Treasury for that year. Despite the financial crisis of 2008 and “austerity politics” the UK remains the fourth richest country in the world. We continue to bathe in the afterglow of slave related prosperity but there is little evidence that the present UK government is at all motivated to try and rectify this great historical wrong by, for example, funding fundamental research into sickle cell disease. For a discussion of slavery, reparations and sickle cell see:

It doesn’t have to be like this. One of the most exciting presentations at the conference was by Professor Marina Cavazzana, who works at the Hospital Necker in Paris, France. She presented preliminary results on gene therapy for 2 patients with thalassaemia major and one with sickle cell disease. The first sickle cell patient to be treated was a 13 year old boy with recurrent episodes of severe pain, the acute chest syndrome and a silent cerebral infarct or minor stroke. The two patients with thalassaemia are both blood transfusion independent 14 and 11 months post treatment and the sickle cell patient, 4.5 months post treatment, has not had a single hospital admission for sickle cell pain and has 24% normal haemoglobin A, produced from his gene-modified stem cells. Professor Cavazzana predicted the role out of gene therapy for haemoglobin disorders to multiple centres around the world in the next two years.

Of course, the issues around sickle cell in the US and Europe pale into insignificance compared with the situation in Africa where the number of individuals with sickle cell disease are much, much greater. One of the themes of the conference was how to accurately determine the global burden of sickle cell disease and how countries in Africa and South America are grappling with this problem. Suffice it to say now that whenever anyone says that sickle cell is “a rare disease” this statement must be challenged and refuted. Frederic Piel, from Oxford University, England, presented work estimating the number of babies born annually with sickle cell disease. He showed that in 2010, 305,800 babies were born worldwide with sickle cell and that by 2050 this was projected to increase to nearly half a million each year (404,200). The majority of these births are in three countries, Nigeria, the Democratic Republic of Congo and India. He has calculated that if simple measures were implemented in these three countries, including prenatal diagnosis, universal penicillin prophylaxis and childhood vaccinations, nearly 5.5 million children’s lives could be saved over this period of time. A reflection of the scale and urgency of the problem.

Whatever new treatments come out of the current wave of research in the US and Europe, it is imperative that they are rolled out to the developing world as quickly and efficiently as possible if we are to make any significant impact on the total human cost of this disease.

1 Response to Research interest and funding in sickle cell